18. As the most widely available and best value, Shimano components are preferred. Under no circumstances should the Scottish Cyclist use Campagnolo simply to show to his peers how stylish and wealthy he is. Stylish, expensive kit is no substitute for dogged training at ungodly hours of the day in horrible conditions with a heavy bike.

17. Facial hair is certainly not prohibited, in fact it may be extremely useful to insulate the face. This is especially practical for long-distance tours.

However in freezing conditions this may become uncomfortable. Further reading: the Daily Record’s report of how Mark Beaumont’s beard helped his round the world record cycle.

15. The Scottish Cyclist should never ride without a helmet. This is due to the unreliable road quality, often treacherous weather conditions and the proliferation of bampot drivers. During winter, traditional cycling caps, wooly hats or handkerchiefs are worn for insulation (any colour or style).

Helmets may be any colour or style, but white is not preferable, being the preferred colour of the show-off and prone to getting dirty. Helmets can be worn when venturing indoors. The Scottish Cyclist doesn’t care what people think of him/her.

This cyclist is actually an Englishman but while riding with his local club in Scotland he shows some of the spirit of The Scottish Cyclist by always riding with a helmet. He wears a cycling cap sponsored by a Scottish pasta manufacturer and wears practical yellow eyewear.

14. Hair should be kept neatly short, as this is most practical and easiest to manage. Investing in a set of clippers and cutting one’s own hair is cheapest in the long run. However, the particulars of style are of little importance, so the Scottish Cyclist can sport a ponytail or comb-over if he can be bothered with the extra hassle, it doesn’t really matter. Following fashion with regard to hairstyles is forbidden however. No highlights, self-consciously messy cuts, ironic style mullets or peaks. 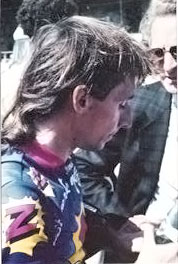 13. It should go without saying that ridiculously stylish eyewear should not be worn at any time. Eyewear should be cheap clear glasses to avoid rain and road-dirt, except when the sky is cloudless (generally only in July and September). Glasses may be worn under helmet straps and headband or cycle cap, to avoid losing them.

Not sure this comes under ‘stylish’ or not

After the £4000 Rapha Suit was released, John G from the Velocast said ‘they’re dead to me’. The Two Johns seem a reticent- they are suspicious of the marketing ethos on the Rapha site. As proponents of style, I’d have thought they’d be more pro-Rapha.

The Rapha products are very nice. For most people it’s hard to justify £240 for a jacket, or £150 for a gilet though, and they can’t even see beyond the price tag. I tried on that Classic Softshell jacket in the summer and pretty much desired it immediately. The cut was excellent- it just felt right, and I could see myself enjoying a wet, windy winter ride all the more for having it on my back. The design and quality made it worth the money, in my opinion, but the problem was I couldn’t afford it.

Hats off to them though for having an open blog and engaging in debate with customers/posters about pricing, design and quality. There’s a very lively one (a debate) here about Rapha’s Classic Softshell Jacket.

Couldn’t afford the Rapha, or didn’t want to? I have been known to spend £180 on a meal for two- so I am not averse to splashing out once in a while, but neither am I a millionaire. I’m sure that you’d start to see the value on Rapha a few years down the line when the product is still wearing well, but for me there is so many things to spend money on in cycling, I am continually looking for deals.

And as any follower of the Official Rules of the Scottish Cyclist will know, style should never be prioritised over functionality! I ride my bike for excercise, training, racing, and functionality comes first, cost second, and aesthetics comes after. Incidentally I have bought a Gore Bike Wear Oxygen SO jacket priced at £120. Which isn’t as nice but does the job just fine – the £120 difference will be going towards a new set of wheels for next season.

Rapha even states: The 2007 version had two protective shoulder pads (reminiscent of a donkey jacket), taking into consideration that riders use both shoulders to carry their bag of choice. We soon realised this was over-egging functionality and jeopardising form and that the one shoulder pad was how it should remain, an iconic and practical detail.

The designs are nice, but there is also something about them that is trying a little bit too hard perhaps. Any Rapha fans wearing more than a couple of items tend to look like (or want to) a walking catalogue model. Out riding last weekend, Auchendinny Chris said, albeit while wearing a Rapha rain jacket, (and I partly paraphrase):

I like the products… they’re well made… I respect the company for doing something different, investing in design… but ultimately it’s about cycling, not about looking good in black and white photographs. Couldn’t have put it better myself! Official rules of the Scottish Cyclist.

#5. Team kit is generally frowned upon, especially if matching shorts and jersey are worn. Matching cap, gloves, socks, etc all at once is strictly oot ay order! If the Scottish Cyclist, is in a team or club, then wearing the kit is OK, but lots of matching items should not be worn at once, and the kit certainly shouldn’t be white, for obvious reasons. In some circumstances retro team kit may be accepted, e.g. Robert Millar’s Peugeot jersey, but it should never be worn as a matching set.

The Official Rules of the Scottish Cyclist