Recently Craig Hardie, top cyclocrosser and grass track racer, and owner of Hardie Bikes shop in Cairneyhill, posted some old pics on facebook that piqued my interest- I rode mountain bikes in Edinburgh’s Pentland Hills in the early 90s and even raced a couple of times.

Craig has kindly pulled out some of his old diaries from the 1994 era and reminisced for a bit for me:

I started to get into XC when I got injured in my first sport of Moto-X which I had been competing in for about seven years, after my shoulder injury I was using Mountain Biking to get fit and started enjoying it more and more. I then looked at trying a race in 91 where I took part in the fun Cat at a race in Peebles and went on to win, the rest as they say is history.

At this same venue on the day I watched a certain James Ouchterlony (newly up from the juniors) leading a certain Sandy Gilchrist in the senior race, James then went on to snap his left crank arm off and get passed by Sandy only to claw his way back and win!! That was an inspiring day for sure and little did I know in a few years I would be beating these two riders I had watched in the top Cat 🙂

The scene was great in the mid 90’s as Mountain Biking had really taken off and was buzzing, prominent race teams of the time were Pentland RT, Paisley RT, Penicuik RT and 232 RT. Courses sometimes consisted of one lap of 20 miles, the races usually were up to three hours long with mostly natural terrain of singletrack, fire breaks and farm tracks.

There were races all over Scotland and up and down the country. I competed in Nemba’s, BMBF’s, Norba’s and of course the SCU series, all which were very well attended and I was competing against people like David Baker, Adrian Timmis, Nick Craig, Gary Coltman, Richard Thackray and Martin Earley in the south.

The Scottish scene was getting great reviews and you were getting over the border invaders at a few of the races, in the Scottish Champs at Hawick 94 Paul Hinton of Team Raleigh Turned up and this in turn gave me extra motivation to win as I could not have an English Pro coming up to win our Champs!

Making the most of the extreme conditions we have had, this video, shot by local rider Steven Smith, showcases the skills of Stirling mountain bikers on a section of built trail nicknamed Streetfighter.

In drier conditions, Steven filmed himself riding Bridge of Allan’s Mine Woods– also well worth a watch.

Flickr is a brilliant source of images, and I knew I’d find some great stuff there. First stop: the Cycling in Edinburgh group, where regular poster chdot had unsurpisingly posted some good shots. 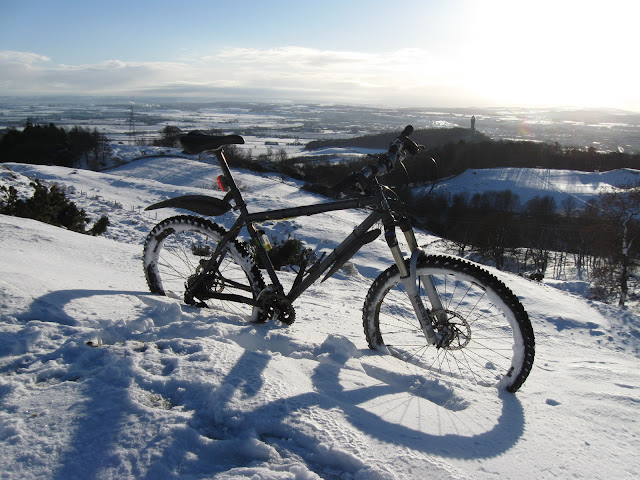 Cyclingdriver on flickr commuted on his mountain bike, and beat the snowdrifts but was thwarted by a full train.

Grant from Cowdenbeath in Fife sent me this shot of a midweek ride/walk. The snow confuses the camera giving the landscape a positively arctic feel.

I asked twitter friends for their snowy Scottish cycling pictures today, and was innundated with great shots. Here are some of the mountain biking ones. Eddie Addis takes Dumyat in the Stirlingshire Ochils, pic by Steven Smith. Snow has been blown off the Ochils, so some of the areas are rideable with care.

John Farr aka the 40 something runner, at the entrance to Lennox Forest looking towards Loch Lomond. Stu Potter riding at Innerleithen at the weekend, pic by @_Spakman. There is now over a foot of snow at Glentress and Inners, and the trails are unrideable.

Richard Barton takes his Marin Mount Vision out at night in the Ochil hills.

Mark Young was also there, coaching in the snow. The Scottish Cross Country mountain bike series was won by Dave Henderson of Pedal Power RT. He covered his series in a blog post that came out this week.

This brilliant pic was put up on twitpic and I’d love to embed it here but SXC have a special agreement with a photographer called “Torks” who does all the series photography exclusively and sells his work to competitors, so that would be a bit naughty.

you can find all the images from the SXC series at Torks.co.uk. More cracking pics on the Pedal Power blog entry, via the link above.
Cracking video below, which I think should be cool to embed(!) and that gives some sponsor love too, which is important.

A post on the great George Berwick is long overdue on this blog, and it was suggested to me by a chap called Robert on flickr that I was short changing him a wee bit by omitting him from my Top 10 Scottish Cyclists of All Time. I’ll admit that list is biased towards road racers and was limited by my own limited knowledge of Scottish cycling history. So let’s look more at George Berwick.

He seems to still hold the Scottish 24-hour time trial champion with 448.70 miles. That alone is worthy of celebration, on this of all blogs. I must find out more. He was a prolific racing cyclist and although now a touring cyclist deserves a bit of respect for his racing time. This is corroborated on the Glasgow Road Club website.

He founded the Rough Stuff Fellowship in the 1950s, a group dedicated to tough off-road riding and touring, and is still a member today. These days he runs their ‘Vagabonds’ group in Fife. Robert comments: I think it would be a very tough cyclist indeed to accompany him on his travels, even now.

A cyclist I know called Crispin is another keen Berwick fan, and nudged me in the direction of a few other links. George’s writings were featured in a the CTC Fife Wheels newsletter under the moniker of McNasty and one piece is reprinted here on a site called Total Cycling. The casual style is entertaining and belies the sheer number of miles he would batter out during his tours.

This vague collection of links shows I still have quite a bit to learn about the man. I love a good photo, and have been unable to find one of George but I’m sure he’s included in one of the RSF galleries.

One key fact, though stands out. The RSF was founded in the 1950s, and Scots were riding off road long before anyone had heard of Marin County. George Berwick and Davie Bell (another who is under-represented on this blog) had a strong hand in the establishment of mountain biking long before Gary Fisher, Tom Ritchey and Keith Bontrager.

I’m a road rider primarily and that comes through in the content of this blog. However I used to mountain bike a lot more when I was younger, and I still appreciate almost all forms of cycling. Scotland has some great natural and man-made playgrounds when it comes to off-road cycling as this youtube vid from Freeride Scotland shows. The track is pretty cool too.

Apart from the fact that the Five is adored by a lot of mountain bikers I know, this vid also piqued my interest because it features one of my local trails, Dumyat, a hill in Stirling. The way Danny Mcaskill gobbles up the big rocky steps is awesome to behold, but it’s good to see he’s human as he loses the back wheel on the dry, gravelly descent.

The testers also make short work of Glentress’ swoopy berms, but it was the display of skills on the natural trail that really impressed me in this video.

Thanks to Stu Thomson of MTBcut for the video. It’s running a bit slow on this blog- please allow it a few moments to load up- worth the wait- or try going to the 2011 Orange Five sneak peek on the Orange website, or the MTBcut facebook page.