This piece was originally provided by Simon Kirkness for the Dig In At The Dock race programme this January. He had had a blistering start to the cross season in Autumn 2013 with a podium place at Callendar Park. I asked him what had made the difference in getting improved results. If you are starting to make a plan for the 2014-15 ‘cross season, or just getting back into proper riding after winter hibernation, read on for inspiration…

I was getting a bit tired of being the pumped not the pumper, so after the end of last season I changed a few things to try to compete with the fast boys and give me the edge on some of the other guys. We all know it’s not about just riding the bike faster, harder and longer – there’s a bit more to it. 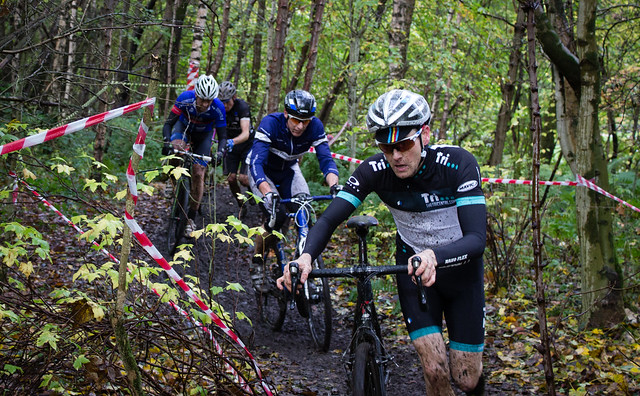 For the early part of the season, like most of us, was just base miles going out riding the bike and basically enjoying it.

Cobblesh
I took a week in Belgium in February to ride the bike and watch a few of the classics, and this kick-started the proper riding.

Throughout the summer I competed in a number of road races and crits as part of my pre-season, along with one SXC race at Cathkin Braes. I was really looking forward to racing in the SXC as that’s where I started racing as a schoolboy in the 90’s. However the mountain bike cross country (XC) didn’t have the same feel as the SCX scene so it was the last XC race I did.

I try and take a trip to the Alps each year to see Adrian and the guys at Alp Cycles. I have been going there for 4 years now and really enjoy riding with them. This year felt different, with the climbs being much more enjoyable and I was able to push myself much more.

You take a milkshake?

I have also really been watching my diet eating plenty food just none of the heavy, fatty stuff everyone knows you shouldn’t be eating.

After the Alps my training took much more of a structure. I was wanting a decent ride at the Lammermuirs Road Race so now was the time to up the training.

My partner Karen owns Meadowlark Yoga, a yoga school situated near the Meadows. Karen is also a cyclist so knows the positions that work best for cyclists. I now do a couple of classes a week and try to do my own practice every day as soon as I get up. 10 minutes in the morning is all it takes. I feel introducing yoga into my training regime has really made a big difference with my strength and flexibility.

Runners lunge is a very good position as it can open and stretch the hips, which are often very tight for us cyclists.

Headstand looks a bit fancy but great for core strength and balance.

I didn’t only decide to republish this because of the pictures of Simon in funny poses. I had had a bike fit and had been doing stretching and core strength work in winter 2013 to try to minimise back pain on the bike. I reckoned that a stronger body all around helped me to sprint harder & faster and I was a bit less knackered at the end of a hard club ride or race. If you would like to find out more about how yoga could improve your cycling performance contact Simon or Meadowlark Yoga – meadowlarkyoga.com