Robbie Hassan announced recently, on his blog, that he was hanging up his racing wheels.

Robbie was a Braveheart funded U23 rider who moved to Spain to race full time and have a real go at making it as a pro bike rider. He is someone who I have followed since getting into road cycling in 2008 and starting this blog so I wanted to tip my hat to his career, even if it has ended before he reached the goals he would have wanted.

The impact of a 12-week knee injury on top of struggles against health an allergy setbacks have led to the decision to call it a day.

As I followed the local racing scene in 2009 and 2010, Endura were dominating with a strong squad of all the best Scottish riders including Oliphant, Hand, McCallum, Lines and Creber. I celebrated any club rider who could get a result against them and got myself into trouble once or twice trying to stir up light-hearted banter on twitter that got taken badly.

Disappointed with 5th in the Scottish champs 2010 behind 4 Enduras

Robbie got one or two of these results, in the Super Six series for Glasgow Wheelers. He then moved on to the Endura / Pedal Power development team and with a bit of organisation and coaching behind it, this group dominated for a time, with Robbie starting 2011 with a win at Gifford, while the ‘big’ Endura team focused on the Premier Calendar and Tour Series, which they went on to win later.

pipped by a pro at the Billy Warnock 2010 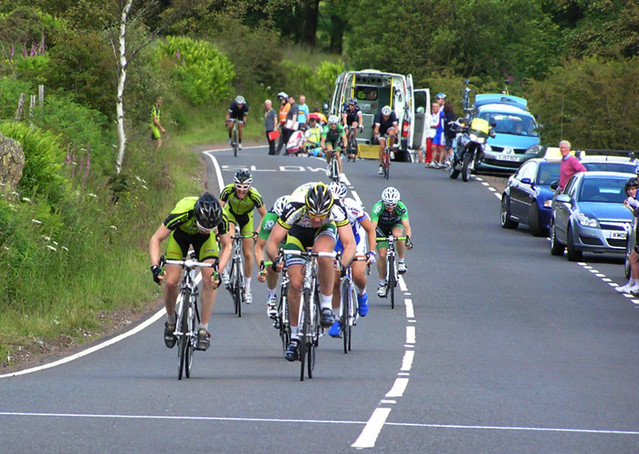 Although he rode bigger races and may have got better results in Spain and at the Premiers, dis ride in the Tour Doon Hame in 2011 was one that sticks in my memory – I was at my ‘peak’ as a blogger, doing race previews and results for Scottish events, and news items for any Scottish rider doing well abroad or down South.

What always got me excited about the Doon Hame was the composite teams of amateur riders, to see how well they did, or how long they lasted, in some cases, against the British pros. For nostalgia, here’s my 2011 Tour Doon Hame preview.

It was exciting to see how well placed he was after Stage 1 and just over a minte down on GC after day 2 and finishing top 20 with some KOM sprints against Jack Bauer.

After that he moved to Spain and the Ibaigane Opel team – at this point my blog output was waning and more and more people were putting out quality race reports on their own blogs – a good wrap-up of his 2013 season is here.

I think it was Brian Smith on the Velo Club Don Logan Podcast who said at the time that Robbie was the Scottish rider most likely to make it as a pro – it wasn’t to be but I tip my hat for how far you got.