The company works closely with National cyclocross champion Ian Field, who was up in Fife recently for a two-day training camp organised by some of the Team Leslie Bike Shop / Bikers Boutique people. 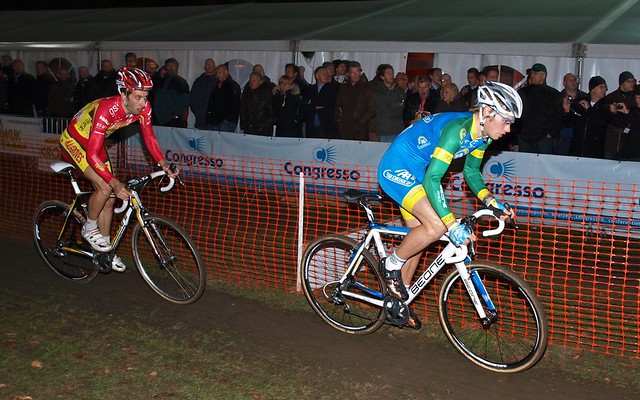 Dan and Ian released a webinar entitled ‘Cyclocross Season – Time To Get Ready‘. The 1-hour presentation comprises audio and slides covering a vast array of tips to get more out of your cyclocross racing, including equipment choices, skills drills and training sessions.

I have always enjoyed absorbing as much of this sort of information I can during the past 5 years racing. While it’s always enjoyable and sociable to just go out and ride with clubmates, I found that doing working on my own (to heart rate, although power is better) with specific training sessions, and focusing on structured high intensity interval sessions allowed me to get the best race fitness while juggling the finely balanced work/family/cycling equation.

Tips from the Two Johns Podcast, Coach Joe Beer Podcast and Joe Friel’s website added to my knowledge over that time and I highly recommend the webinar above. If you want to take things further, Dig Deep Coaching offer 6 and 12 week training plans for cyclocross.

A friend of mine, based in rural Aberdeenshire, found that his connection speed was too low to run the webinar, so for his benefit and that of others, I’ve summarised the key points below. END_OF_DOCUMENT_TOKEN_TO_BE_REPLACED

I’ve been meaning to do this post about balancing family with training/racing but ironically I haven’t had time to write it. It’s a situation I’m sure lots of other guys are in so I thought I’d share my experiences and also those of a few people who told me how they do it.

I’d summarise the key points as: realistic (but specific) goals, smart training, a supportive partner and being the best Dad/husband you can be during the time you’re not biking.

Road racer John Gartland explained to me how he got the bug:

I started racing this year at the tender age of 39. I had taken up cycling 2 years previously with the challenge of riding the Etape Caledonia and thoroughly enjoyed the challenge of the training. This led to riding in other Sportive events such as the Fred Whitton and La Marmotte in France last year. During spring of 2011 I met Paul Hornby from Glasgow Ivy who I got to know and who introduced be to chaingang riding. This seemed the perfect step from the Sportives and I spent the remainder of 2011 learning how to group ride (a broken collar bone last July was a painful lesson) and at my first race, the Billy Warnock in August, I placed 9th and was hooked!

For me, ironically, I only started riding seriously the year my first child was born so it was not an ideal start. Previously to that I enjoyed nights out too much, and could never get myself out of bed in time for bike riding. Following a similar path to John, I enjoyed the challenge of sportives, and progressed my fitness with my club, before taking it up a level with chaingangs. My progress has been more gradual though, with my first races in 2009, and having been dropped from the bunch on many occasions I finally placed in a race- 10th in the Lothian Flyer 2012.
END_OF_DOCUMENT_TOKEN_TO_BE_REPLACED

The other weekend my younger brother came over from Switzerland for a 2-day MTB skills tuition with Andy Barlow at Dirt School.

The Glentress trail centre is known as one of the best in Britain, if not Europe and now we have top-not coaching to match: Dirt School run their training courses there: founder Chris Ball focuses more on elite downhill and XC racers while he and Andy Barlow provide skills coaching to any age and ability of rider.

My bro is pretty experienced, spending all summer riding local trails around Zurich and the Swiss ski centres and it seems that he got a lot from the weekend. He brought his all-mountain Transitions Covert over in a bike bag especially. It’s set up with 6″ travel front and back and a Hammerschmidt internally geared BB.
END_OF_DOCUMENT_TOKEN_TO_BE_REPLACED

Disclaimer: don’t attempt any max testing without a medical check. Seriously. This info is put together from knowledge gleaned from a local coach I worked with, Joe Beer, and the Two Johns Podcast- I believe John G is a coach. It’s best to consult a doctor, as well your own coach first. Don’t attempt if you have been unwell, have an injury or if you are not already fit.

I got some coaching over last winter and it improved my fitness and racing, albeit a moderate amount. However I was 31 when I started road riding, so the improvement curve will be shallower than that of a junior, and I’m balancing training around full time work and 2 young kids.

The heart rate zones were key to my training- working within specific levels of intensity at different times. I was getting quality training done in the limited time I had available andthis resulted in better performances in 2011 with less time for riding.

To work these heart rate zones out I needed to do a max test. The ‘subtract your age from 220’ rule of thumb isn’t really accurate- my max was 196bpm last autumn, where the rule of thumb would tell me 187. A few beats per minute can be the difference between going lactic or not, so it’s important to be as accurate as possible.

Below is a video from Coach Joe Beer showing a ramp test on a static bike, tied to a PowerTap meter. This is an accurate way of doing things but how many cat.4 racers do you know with power meters? It’s more likely you’ll be working with heart rate.

END_OF_DOCUMENT_TOKEN_TO_BE_REPLACED

I’m a bit late this post, but after last year, I thought I’d do it again. Owen P is proud to announce newly signed sponsorship deals for the 2010/2011 winter period.

For heart rate monitors he is sponsored by tonydeebo, a bike-obsessed world traveller who very generously sent his old Polar S625X HRM/bike computer. A nice bit of kit that will enable Owen to take training to the next level and make the most of riding time when baby no.2 arrives.

Training programme has been planned by Donald Maclean, a workhorse cycling coach and volunteer who devotes many hours of his time to the Wallace Warriors, the incredibly successful youth section of Stirling Bike Club. Donald is working towards his British Cycling level 3 qualification. As far as I know, the only other coach in Scotland with this qualification is Mark Young, who has worked with Endura Racing and the Scottish Commonwealth Games Team.

For 39-tooth chainrings and 9-speed cassettes John Galloway has provided support. John is a former velocast presenter and has some great chat to share on twitter.

For 9-speed derailleurs I thank twitter. To my shame, I have forgotten the name of the generous someone who posted me an nearly new Tiagra mech for my winter bike refurb.

Jim aka cowspassage cut me a great deal on some 9-speed shifters. Worth a follow on twitter if you fancy some witty banter.

Plain black Gore Bike Wear bib shorts by were provided at a very attractive discount by Pete at Flying Fox Bikes. The Gore kit is simple yet functional, a quality that appeals to The Scottish Cyclist.

How did you first get into cycling?
I have been cycling since 1984; I did BMX freestyle till 1991. Once when I was riding an MTB between work I stumbled across a time trial. I did TT’s and road racing mostly, in the era when Graham Moore (former VC Olympia, now Stirling Bike Club vet) and Neil Cameron (Falkirk BC, former Scottish Champion) were top dogs.

What led you to coaching then?
In 1999, with marriage and children taking more of a priority, I decided to find ways of making more of my training time. This led me to coaching, and after reading Joe Friel’s Training Bible

, I wanted to learn more. I took the British Cycling Club coach award and was subsequently asked by Graeme Herd at SC to work with some of the Under 23s; Gary Hand and Dave Smith come to mind.

You seem to have got the coaching bug pretty quickly…
I gave up my job as a manager of a Ceramic Tile Store and went full-time doing coaching. I had paying clients and the rest of my wage was from the SC work. Now this is where things get interesting, since I was looking for some coach admin software and stumbled across TrainingBible.com. The long and the short of it is, that I became friends with Joe, Joyce and Dirk Friel, and have even had Joe and his wife over to Scotland for some coaching work. I still keep in touch with them even after 6 years or so.

When I first met you, you were a development coach- how did that come about?
In 2006, Graeme Herd left the SC and it was all change in the direction of the funding. An opening in development came up and I grabbed the opportunity. This is where my work with Donald Maclean and the merry band of volunteers began, and Wallace Warriors was born.

But then you moved towards working with the top athletes?
With Dehli 2010 looming large, in 2009 the Elite Athlete Programme was restarted, Graeme Herd once again at the helm. I applied for a support coach role and restarted my working relationship with Herdy once again. The support coach role is a secondment, and in October (post Delhi I think), unless funding is forthcoming, I will once again become a Regional Development Coach.

The Warriors are a strong part of Stirling Bike Club- any thoughts on the local and youth scene?
The future for the kids in Wallace Warriors is looking good, they have an excellent coaching team, and with talent like Jane Barr, Jack Barrett, Rob Wilkins and Eddie Addis, SBC is well represented in the ranks of the elite. I do hope that funding will make it possible to support an extended programme of support for the Jnrs (u23s and women would be nice too), and with initiatives like the Braveheart Fund, it will be possible to help our boys and girls reach their potential.

Dehli 2010: what do you think Scotland can achieve?
The cycling team for the games is huge, possibly the biggest ever assembled to represent Scotland. With previous medallists and current top performing elites the potential for medals in Delhi is there, however, lets not forget that the Games have countries like Australia, Canada and England to name a few who will make the standard of competition extremely high. Our medal haul from Melbourne was the best we have had so far and it will be a tall order to match or exceed this. Personally I think a few surprises may be on the cards.

Many thanks to Mark for this interview.
You can connect with him on Twitter