This post is a plug for a Dundee Cycling Calendar, with pictures shot by David Martin. Please buy a copy of the calendar to help raise funds for Steve Donnelly, who was paralysed from the neck down in an innocuous fall in June 2010.

At least 2 Commonwealth Games cyclists are featured. There are also some titillating shots – a couple of bums on bikes, a naked fireman and the kind of marshal you really want at your next road race to distract the opposition.

But I won’t be giving away the full monty here- oh no. You’ll have to actually buy it to be able to give any help to Steve and get the full enjoyment of some nudey pictures posed for a good cause.

I’m thinking I might even pose for my own Liebovitz style photo, but it would take quite a bit of money donated to Steve’s cause to get me to pluck up the courage. Say, £100?

The following video was brought to my attention by Ayr Roads Club and Scott Tares on twitter, and I felt deserved a blog post. It was commissioned by CCA to mark the beginning of Glasgow’s tenure as host of the 2014 Commonwealth Games, and is one of six films that explore the ways in which artists can respond to sport in its broadest sense, as well as the social and cultural impact of the Games on the city and its people.

It is beautifully shot, including views the like of which make me proud and delighted to live in this wee country. It honours our three greatest cycling heroes and has a thoughtful voiceover that recalls some of the best cycling writing: Paul Fournel is overtly quoted but for me, it also recalled the intelligence Tim Krabbés writing had for the bike, and more generally, the kind of introspective pieces found in Rouleur.

It’s 9 minutes but well worth taking time out to enjoy.

Also, the The Bicycle Tree, at Brig O’ Turk is featured at around 6 minutes.

Working with the book Besoin de Vélo by French writer Paul Fournel, Double Diamond takes us through the physical and philosophical landscape of a cyclist using voiceover, idiosyncratic filming and cycle sound recording techniques against the backdrop of the Scottish landscape to transport us into a cycling world both familiar and unfamiliar. Filmed across Scotland from Dumfries to Sutherland the video includes passages of fact, illusion and speculation referring en route to Scotland’s long association with the bicycle, from Kirkpatrick Macmillan to Robert Millar, Graham Obree and Chris Hoy.

With thanks to Creative Scotland, Leonie Bell and Clare Simpson Philippa York, while racing professionally as Robert Millar was often someone of few words. But those words were carefully chosen and could be cutting or insightful.

“Why stop for a cup of tea when out training, when you could have one when you got home? Either you were training or you weren’t.”
As a racer, training was taken seriously. Rumour has it Robert would do a dozen reps of the Crow Road to try to simulate Continental climbs.

On my Robert Millar birthday post, I made reference to Ed Hood, a writer who contributes to Pez Cycling News and Veloresults.

Alastair Hamilton commented on the blog and drew my attention to two other Scottish writers who contribute to Pez: himself, who lives in Spain, and Gordan Cameron who lives in Skye and who also makes radio programes on cycling for the BBC in Gaelic. He has covered the Tour de France from the roadside for Pez.

I have done a bit of digging and found this interview with Gordan Cameron. He is an interesting person: Gaelic is his first language, and he lives on Skye in a semi-self-sufficient way. Sounds like a nice life! The riding on Skye sound good but hard- I have never cycled there but Hands On Events do a sportive in May which would be an ideal way to experience it. Click the link above for the full interview with Gordan. 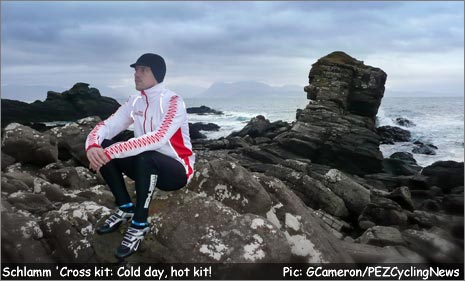 Some stories by Gordan
Remembering Laurent Fignon (scroll down)
Saul Raisin interview, on losing his cycling career, comin g back from injury, and remodelling himself as a triathlete and runner with charitable foundation to his name.
Following the Tour de France (in gaelic) – listen again till 20th September
On Chris Hoy’s sports personality award (scoll down)

Summer is here and if we are lucky, July and August give the Scottish cyclist a rare chance to build their tan lines for a few days. In fact, this summer has been unusually fine, so Scots may be beginning to build up a nicely defined line between their default pasty-white complexion from the light beige skin tones achieved during summer.

As the Tour de France hits the mountains, here is a cool illustration of Robert Millar, Britain’s and Scotland’s greatest ever tour climber. Rider even. It is the second part of Richard Mitchelson‘s ‘Tete de la Course’ series.

Richard’s work has been used on a series of T-Shirts for Rouleur magazine, featuring cycling greats such as Eddy Merckx, Marco Pantani and Greg Lemond.

Richard has also featured in the magazine itself, with an extensive feature on the classic 1989 tour in edition 16. This issue also had articles on the Z Peugeot team that Robert rode for.

This is a new podcast, that has been finding its feet a little bit. It has a very welcoming, inclusive feel that I don’t think this is a symptom of it’s youth- there is a deliberately anti-elitist ethos there that is intended to tie in with the Veloreviews website and community forum.

If you are not a fan of pro cycling news and comment, and can’t be bothered with the nuances of bike culture and the various sub-niches within cycling, this is the podcast for you. As I see it, the ideal listener is mainly into riding and buying bits for their own bike, as well as improving their fitness, rather than wondering why last year’s Paris-Roubaix runner-up is is running a carbon or aluminium bottle cages this year.

The podcast is a supplement to the Veloreviews.com website and community, which have dipped into and seems cool. It’s the sort of thing that is working to build up long-term relationships and a resource of really useful information. The presenters of the podcast all interact on the Veloreviews forum, giving fitness, mechanics and product advice.
END_OF_DOCUMENT_TOKEN_TO_BE_REPLACED

A while ago, John G of The Two Johns Podcast mentioned the theme tune that they used for the intro and outro: Kraftwerk’s Tour de France.

I was perplexed because I had a copy of this track and it wasn’t the same. Then last week all became clear. John G mentioned that Kraftwerk had recorded a new version for the 2003 centenary edition of the race. Hooray- I went straight out to buy the song!

You can buy the four tracks of the Tour de France 2003 single on Amazon- I prefer this to iTunes because the format is DRM-free mp3.

The live album Minimum-Maximum is cool too. It’s a double CD that features live tracks from a 2004 European tour. All the classics are there with a modern edge.

As a teenager I discovered mountain biking, thanks to the affordable bikes from Edinburgh Bicycle Co-operative, the nearby Pentland Hills, and an enthusiastic younger brother.

Like many kids that age, we read MBUK and adorned our bikes and equipment with free stickers. We read Mint Sauce, the cartoon strip about a mountain biking sheep.

And we just didn’t get why a roadie would want to spend hours on the flat tarmac when there were hills, bumps and mud to be enjoyed. “Roadie scum!” was the not-completely-tongue-in-cheek battle cry.

I have just completed my debut road racing season, and although I got a kicking, I am hungry for more. Instead of getting out on the trails and getting muddy, my thoughts veer towards winter training: ‘base miles’, turbo trainers and zone 1 heart rates; and saving up for race wheels, winter training kit, and team kit. Somehow I have become one of those ‘roadie scum’.

Mint Sauce was created by Jo Burt and published every month in Mountain Biking UK. Mint Sauce is copyright and is not used here with permission – hope this is not a problem!